Israeli vs American pistol holster protocol, which is better?

Since the IDF recruits young adults at the age of 18 and gives them firearms, an extra level of safety was needed to protect them from accidental discharges. This safety feature is to never have a round in the chamber, until confirming target and target background, and being ready to fire. Alternatively, American military experts and the various first responder agencies have decided that the extra precious seconds, saved by having the firearm already cocked and ready, will be the difference between life and death. Unfortunately, the leading cause of firearm accidental discharges (FAD) in the US is carelessness around a loaded firearm, and mainly pistols, since they are smaller and easier to mishandle.

We decided to test which protocol is better and why?

Click the image below to watch the video:
Israeli vs American Pistol Draw Technique We used the Walther P99 9mm handgun, which is a common firearm – it doesn’t  have a safety, but it incorporate the long pull trigger on the first round, as a safety measure. We tested the Israeli protocol first, and then the American one, and repeated the test a few times to make sure that our results are accurate (and also because it was a lot of fun ;). We used a stopwatch to count the time between the draw (i.e. when the hand starts pulling out the pistol) and the first round fired.

Israeli protocol results:
We loaded the pistol with a full magazine, but did NOT cock it – we drew on a “GO” order randomly after the shooter declared ready, cocking the pistol while drawing and immediately pushing it forward, pointing toward the target’s center mass, and firing 2 rounds into each of the 3 targets.
Results: all shots hit center mass, with the first shot fired 1.42 seconds after drawing. 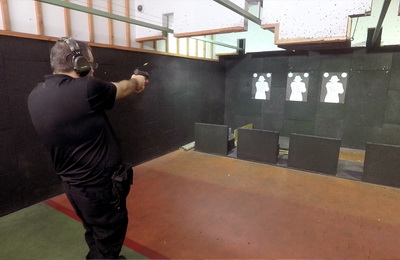 American protocol results:
We holstered the pistol with a round in the chamber – the shooter declared ready and was given the “GO” order randomly, drew the pistol, pushed it forward from the chest, pointing toward center mass, and then fired 2 rounds into each of the 3 targets.
Results: all shots hit center mass, with the first shot fired 1.02 seconds after drawing.

To Sum Up:
Even though the American protocol is just a little faster, the Israeli protocol is much safer as it prevents about 99% of all firearm accidental discharges, since there’s no round in the chamber when the firearm is holstered and not in use. In my opinion, safety trumps these 0.40 seconds, that can probably be shaved off with practice drawing and, of course, situational awareness.

Which protocol do YOU use and why?
We’d love to hear your thoughts about this!

Coming up:
One of the leading causes of death in most traumatic injuries is bleeding out, especially if the situation involves gunfire. The C-A-T, or Combat Application Tourniquet, saved countless soldiers in Iraq and Afghanistan, where they went into action already wearing these on their limbs, saving them precious time in case of an injury involving massive bleeding. In the next post we’ll learn how to properly use the C-A-T, and give some life-saving tips in case of a massive bleeding.

Guest
John
Share On FacebookShare On TwitterShare On Google
You present good think points. I prefer staging a self-loading pistol with a chambered cartridge. With a DA revolver I stage with all cylinders loaded- no hammer on an empty cylinder. I assume your test was done with well trained personnel. Consider doing the test with non-professionals/non-“pistolaros” and see if the results match your first test. Individuals who can safely handle/draw/shoot/re-holster a loaded handgun, but who are not what one call professional shooters (police, private security/body guards, military SOF, and similar) will most likely have much slower response and may fumble during the draw on an empty chamber scenario. Naturally,… Read more »
Vote Up0Vote Down  Reply

Guest
Bill
Share On FacebookShare On TwitterShare On Google
Unless there are children in the house, I always keep one in the pipe. I don’t know what the crime rate is in Israel, but in the U.S. it is pretty bad depending on your location. Plus, there is a terrible drug problem in the U.S and they will do anything to get money or something they can steal and sell to get money. More and more break-ins take place while people are home these days. You rack the slide you might be met with gunfire, while one in the pipe is already ready to launch. My gun for night… Read more »
Vote Up0Vote Down  Reply