Would You Survive An Angry Mob?

Home » Would You Survive An Angry Mob?
Jul 10

Would You Survive an Angry Mob?

Violent protests have been spreading like wildfires lately across the US – would YOU be able to evade and escape from an angry mob?

On February 1st, March 4th, April 15th, April 27th and later on August 27th, 2017, a series of speeches in Berkeley, California, were canceled due to safety reasons – the area was filled with violent protesters who created such chaos that the events were deemed unsafe. In the different instances, the rally areas were filled with thousands to tens of thousands of people, that were protesting for different camps, and after a short while, they turned extremely violent against one another. They targeted anyone who they perceived to be in an opposing group, and dished harsh violence using rocks, clubs, shields and some sharp objects. The protesters created a stampede of rage, vandalising cars, buildings and property in the area. This type of event happened several more times in different locations around the US, and it seems to be a growing concern in many cities like Portland OR, San Jose CA and many more.

Click the image below to watch the video:
Would You Survive an Angry Mob? Can we prepare for this sort of scenario?

We sure can! Most of these protests are scheduled with the police, and publicized in the media or social media, so make sure to stay updated with the local news. If something seems off, do a little background check (using our trusty “uncle google”), and avoid any areas that seem risky.

Always make sure you have your EDC ready and handy (Gear Tier System series) and remember to stay covert by implementing the Gray Man principles and mindset (Gray Man Series). 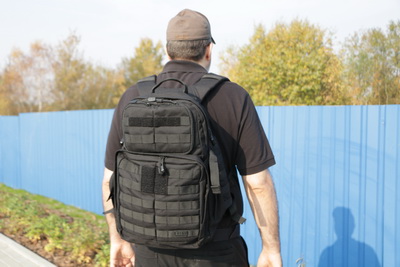 But what should we do if all our precautionary measures failed, and an angry mob is moving toward us?

Blend in! Your main goal is to seem like you are a part of that mob:

To sum up:
Violent protests are a growing trend in many parts of the US – it is always best to try and avoid these type of events completely. But if you’re caught in such a situation, mimic the mob, go with the flow, and then break away and escape the area. Try to remain calm and calculated, and avoid and dodge any direct attacks.

Have YOU ever been caught in a violent protest or an angry mob?
Tell us your story.
What do you think is the most important thing to do during an event like the one in Berkeley?

Coming up…
From active shooters to violent rampages, we’ve seen some disturbing events lately right in the heart of the USA! In our next post, we’ll continue to cover dangerous current events – how to prepare for them and how to avoid and survive them if worse comes to worst.

Guest
Antony
Share On FacebookShare On TwitterShare On Google
Sometimes not always possible to follow the advice, I was part of Search & Rescue Team in Haiti as safety/security officer, Long story but we ended in an Alley with a huge amount of people who were out to Rob us (100+) There was no option of doing the Grey man. (They did not know we knew they were going to rob us). 1) I got us backed against a wall so we knew noone behind us. 2) If we had to make a break for it the weakest part of the crowd (my thinking) was where the crowd met… Read more »
Vote Up0Vote Down  Reply